Posted by Recipe for Success at 7:39 PM No comments:

Posted by Recipe for Success at 7:35 PM No comments:


The occasion was a fund-raising dinner to benefit Les Dames d’Escoffier Seattle and the culinary and wine scholarships fund that is funded through the efforts of the food & wine professionals who are members. This dinner was purchased at the March 31, 2011 Les Dame organization's fundraiser. The lucky winner was Ann Pryd from Hunt's Point, a Seattle suburb. She invited six friends to join her in learning how to make two different pastas and enjoy a four course menu prepared by Enza Sorrentino owner of Enza Cucina Siciliana upper Queen Anne, 2128 Queen Anne Ave. N. Seattle.

Enza made everything look easy, she has a light hand and while wielding large pans and pots in the demonstration kitchen, she moves and looks like a teenager instead of a mother and grandmother! It is patently obvious that she loves cooking with all her heart. The restaurant was closed for the evening, to accommodate us. At the table next to us, Enza's mother, brother, daughter and granddaughter spent the evening: eating, drinking and storytelling, as Ron noted "in the Italian way."
Enza's food reflects Sicily, which is a remote island whose inhabitants have been perennially poor due to geography. The food was simple, straightforward and used ingredients that were readily available in Seattle at this time of year. As Ron explained, "Enza naturally does things as simply as possible, it's the way she cooks, rejecting anything resembling being complicated." The flavors were well-balanced, the colors bold and everyone became engaged, watching the food come together. Tasting, drinking and asking questions; It was a well-traveled group who enjoys eating well.
Enza and Ron did not disappoint! Thank you Ms. Pryde for your support of the Les Dame scholarship efforts...!
PS. If you recognize the lady in the yellow jacket and the gentleman to her left, it's because they were Marilyn and Armandio Batali. Armandino..... this next image is for you. Thirteen years ago at your restaurant Salumi for my birthday we did an interactive dinner, you tried to teach us all how to make gnocchi. In this photo, you're telling me (as gently as possible) no-go on the gnocchi gal. We flunked. 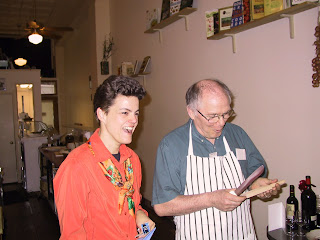 Burgerama @ The DeLuxe Bar & Grill becomes even tastier!
Wednesday Night promotion going on 35 years; has a life of its own
FOR IMMEDIATE RELEASE — Seattle, WA July 23, 2011

Should you find yourself on the north end of Capitol Hill near downtown Seattle some Wednesday and marvel at what all the commotion is about at the intersection of Broadway and Roy streets; it might very well be pedestrians and autos jockeying for position near The DeLuxe Bar & Grill. The quintessential neighborhood spot, known for its burgers and nineteen rotating beers on tap turns 50 years old next year. For 35 of those years, The DeLuxe has hosted a midweek promotion called Burgerama. Featuring full size, hand formed, custom ground prime chuck burgers (choice of DeLuxe hand-cut fries, salad or a cup of soup) all day, at the unbelievable price of $5.59*. (*requires purchase of beverage, dine in only). On Wednesday evenings, the line in front of The DeLuxe, hints at a 45 minute wait and the party going on inside.
"Burgerama is the original midweek break, a tradition at the DeLuxe since 1977, a way to see a lot of regulars and new faces in the restaurant,” says Barry Rogel, second generation restaurateur. My family's had the DeLuxe since the early 60's, but it’s been on the corner of Broadway and Roy since 1932, and we have always been the neighborhood hangout. Burgerama is in line with that tradition - great quality at a great value - it’s been a privilege to be part of the ever changing scene on Capitol Hill for all these years."
How could The DeLuxe improve on the burgers being offered? In the last two months tastings with DeLuxe guests and staff set out to answer that question: the burgers are now even bigger and the buns were resized to fit the patty perfectly. A new, Thursday night promotion, not surprisingly called, Steakarama was added. How do you top Burgerama? Steakarama!

*purchase of beverage required, dine in only

*Requires beverage purchase. Dine in only.